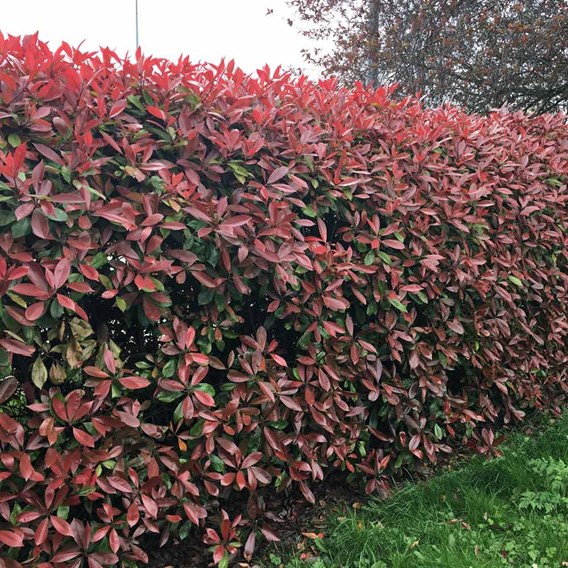 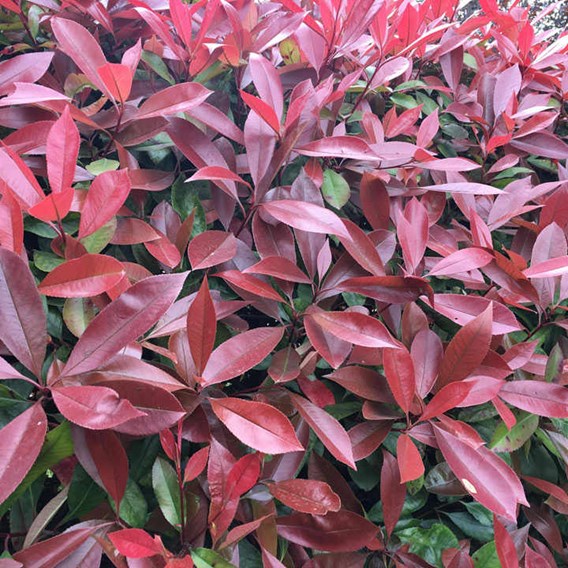 British Grown - Our great range of evergreen and deciduous hedging has been grown at our own nursery in Devon. It has all been grown in pots to give maximum flexibility on when it can be planted but most importantly, it can be planted straight away and before the more traditional bare root hedging can even be dug up from the nursery fields. This gives the advantage of it being able to establish itself before the winter, allowing the roots to spread, ready to spring into action and will grow away much faster than an equivalent bare root plant. Depending on the thickness of hedge required, our plants are ideally planted 4 per metre and for the thicker hedge, in double rows, with the second row in the gaps of the first.

Adds a splash of colour to your hedge. As its new leaves come through they provide a stunning red effect before mellowing to a green, whilst retaining a red tinge in parts throughout the plant. Flowers in May. Supplied height 45-60cm - in a 2 litre pot.

Photinias are one of our best-selling shrubs, as an established 2-3 litre plant. They're great for planting in a border, container or even as a colourful hedge. The evergreen plants keep their large, deep green leaves all year round, in early spring becoming covered in new growth which, depending on variety, ranges from bright glossy red to a distinct pink. Later, large clusters of white flowers are produced, which again cover the plant. In summer a second flush of new red/pink growth is often produced, creating another spectacle!

Our Value Hedging Range is supplied in 2 litre pots, which means they can be planted at any time of the year, establish quicker in the ground and therefore start to create that boundary faster. As a guide, a good density is 3-4 per metre, but you can plant as few as 2 per metre and up to 6 per metre (in a double staggered row). Planting in this density means the plants will grow to touch each other after the first full season and start forming your hedge even faster. If you’d like something a little more instant, we recommend upping the planting density 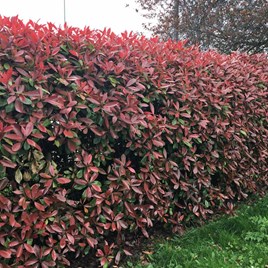