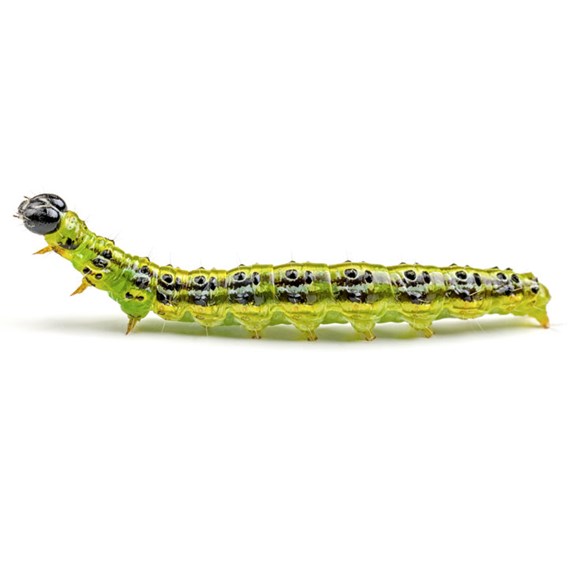 TRAP - Box Tree moth and caterpillar kit for the monitoring and control of this new invasive pest. Supplied as pheromone trap for catching the male moths. Refill available separately - Remove lure from foil sachet and place in lure cage in the top of the trap. If lures are to be stored, stored, store in a fridge or freezer. One pheromone lure will last 5 weeks.

Cydalima perspectalisis a moth from East Asia that is starting to appear in the UK, especially in the south-east. The larvae or caterpillars of this moth feed on box plants (Buxus). The moths lay pale yellow flat eggs that overlap each other in a flat sheet on the underside of leaves. The young larvae that hatch are greenish-yellow with blackheads. As the larvae/caterpillars mature the green body develops dark brown stripes and very mature larvae have thick black and thin white stripes down the body with large black dots outlined in white. The caterpillars start at between 1.5 to 2.0cm long and develop up to 4cm long. The moths have a wingspan of about 4cm. The body is mainly white with a brown head and white wings. The Box tree caterpillars feed and eat the box leaves. This leaves the box plants disfigured with patches of what looks like dieback (not to be confused with box blight) caused by the severe loss of leaves.

The caterpillars develop into pupae that wrap themselves in white webbing. In severe cases, complete defoliation can occur. There are several generations of Box tree caterpillars in a season from April-October. One method of monitoring and catching adult male moths is with the use of the Box Tree Caterpillar moth trap. This is a funnel trap with a specific pheromone lure to attract this species. The moths are attracted to the lure and then drop down into the funnel trap, which normally is filled with some water. By catching males, mating and egg-laying can be reduced and populations monitored for additional control measures. Installation of traps - Take lure out of sachet and place in small cage holder in the top of the trap. Add some water to the trap bucket and replace water on a regular basis. The funnel trap has a clear bottom so catches and water levels can be observed. Hang the trap on a pole/cane/stick close to the vulnerable plants, place in an open area so that moths can easily be attracted to fly in. Each pheromone lure will last 5-6 weeks and should be replaced.

Box tree flying season is between April to October when there can be up to three generations of the pest. Each lure lasts up to six weeks when used with one of our unique traps. These replacement lures can be used as needed to cover a whole season and reduce damage to your box tree hedges. 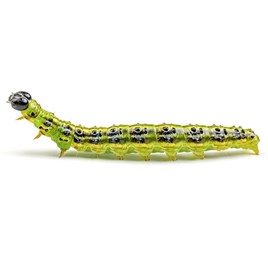