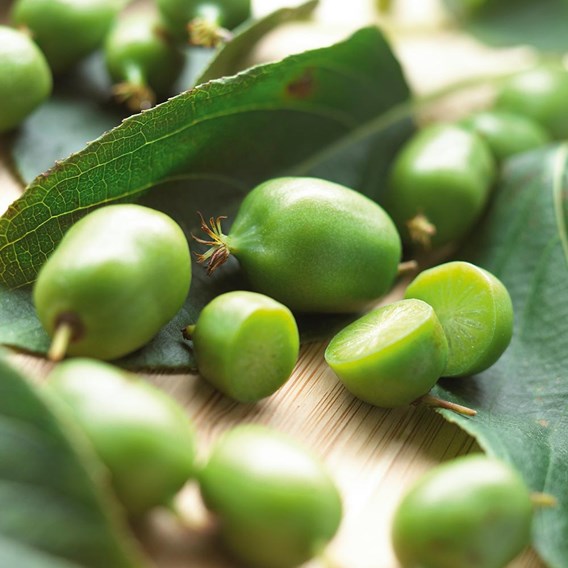 An unusual kiwi which, unlike its more well-known cousins, boasts fruit with a smooth, edible skin! The little kiwis are quite delicious and are produced in abundance - 1000 kiwis per year is not unusual! Self-fertile with remarkable pest and disease resistant too. Supplied in a 2 litre pot.
Hardy, easy-to-grow climbers which will give good crops in the UK, grown on a trellis, arch or pergola in a warm spot, or on a south-facing wall. Plants are very attractive but quite vigorous, and should be pruned to keep them in check.

For growing and planting advice read our leaflet The_Fruit_Garden.

Plant Support: The plants can be grown against a wall to which wires have been attached or free standing wires attached to stout posts. Wires should be spaced 30cm (12") apart with the lowest wire 45cm (18"), and the highest 180cm (6') above soil level. Planting: The plants will grow in any moisture retentive, well drained soil. It is important the soil remains moist especially in periods of rapid growth. The position should be sheltered and in full sun to aid ripening of the fruit. The plants are fully hardy but the flowers may need protection in colder areas. When male and female varieties are being grown they should be planted 1.5m (5') apart. Incorporate well rotted garden compost into the soil and a general fertiliser such as Growmore at a rate of 70g per sq. metre (2oz per sq. yard). Against a wall, allow 20-25cm (8-10") between the plant and its base. Pruning: After planting cut back the plant to just above the bottom wire. Train the lateral shoots horizontally along the wires stopping them when they have filled the allotted space. Stop the plant when it has reached the required height. Fruit is produced on laterals growing from the main framework. These are stopped at seven leaf joints beyond the fruit. Laterals formed on these shoots should be pruned out. Kiwis fruit on mature wood, that is one year old or more. Pruning is a matter of wood replacement once the framework has been achieved, with older laterals being removed to allow new growth to take its place. Excessive new growth should also be removed in summer as otherwise the plant will become over-shaded by itself thus hindering ripening. Harvesting: Pick the fruits in autumn before the first frosts. Store in a cool, frost free place for a month before use to allow the fruit to fully ripen. Harvest: late August-October. Plant: Can grow up to 2m. Can yield up to 20kg fruit when mature. 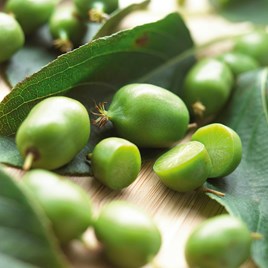